Cookie preferences
This website uses cookies, which are necessary for the technical operation of the website and are always set. Other cookies, which increase the comfort when using this website, are used for direct advertising or to facilitate interaction with other websites and social networks, are only set with your consent.
Configuration
Technically required
These cookies are necessary for the basic functions of the shop.
"Allow all cookies" cookie
"Decline all cookies" cookie
CSRF token
Cookie preferences
Currency change
Customer recognition
Customer-specific caching
Individual prices
PayPal payments
Selected shop
Session
Comfort functions
These cookies are used to make the shopping experience even more appealing, for example for the recognition of the visitor.
Note
Statistics & Tracking
Affiliate program
Track device being used
Categories
Information
Information 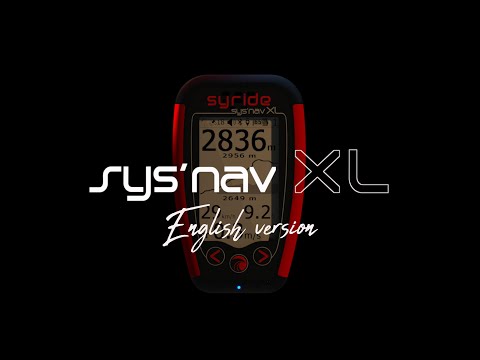 The SYS'Nav XL is a new instrument in the range of Syride flight instruments, positioned between SYS'Nav V3 and SYS'Evolution. It is not intended to replace the SYS'Nav V3.

Introducing the new SYS'Nav XL, a user-friendly yet powerful and super-versatile ultralight flight instrument made specially for freeflight. Whether you're a beginner, an XC pilot, a hike and fly enthusiast, a vol bivouac pilot, an adventurer, a paramotor pilot or a competitor, the SYS'Nav XL will be your ideal companion for every activity throughout your pilot progression. Adapting to your needs, it will accompany you on all of your paragliding or paramotoring flights for years to come.

The 2.7'' screen of the SYS'Nav XL has an active matrix reflective technology similar to the one used in the SYS'Evolution. The advantages for the pilot are clear:

The resolution of the SYS'Nav XL screen (400x200 pixels) has been dramatically improved. The pilot can display more information and details on the same screen. The display is also more pleasant to the eye.

Screen customization is therefore much more versatile with the SYS'Nav XL, with a wide choice of sizes, resizable items, the ability to add text and frame.

The SYS'Nav XL inherits items from the SYS'Evolution such as the much-appreciated thermal assistant, the competition route summary, the vario graph...

To simplify the pilot’s tasks and limit in-flight handlings, we have added the possibility to change the screen automatically on the SYS'Nav XL depending on the current flight phase: Thermalling, in transition, approaching an airspace or approaching a waypoint’s cylinder. The pilot can now focus on flying instead of manipulating buttons in flight.

In spite of the bigger screen, we managed to put a 1 Watt speaker into the SYS'Nav XL while respecting the manufacturer's recommendations to obtain the most perfect sound possible! The pilot will thus have the pleasure to hear the sound of a more harmonious and softer vario. Custom configuration is always possible with our online tool.

Amongst it's many impressive features the SYS'Nav XL also offers Bluetooth connectivity, in case you'd like to connect it to Android or iOS flight apps. So far this has only been tested with XCTrack (Android) and FlySkyHy (iOS). Syride are also working on a new complimentary flight app, which they say will be released on Google Play store soon as a beta version (with limited features to start) and will on Apple Store this autumn.

Expected for its simplicity of use and its reversibility, the SYS’Nav XL has now a USB type C plug. A new plastic injection mold had to be produced to support these new evolutions (screen, speaker, USB...). The file management has also been completely revised! It will be possible to communicate with the SYS'PC TOOL software as before, but also to access the flight data (IGC files) as if a USB disk had been connected. The pilot gains in convenience, he will be able to use his existing phone or action cam cable to connect the instrument and will not have to use the SYS'PC Tool software to access the flight files.

The surface of the electronic board has been reduced to accommodate a battery with a capacity 40% higher than the SYS'Nav (850mAh against 600mAh), it is essential to meet the needs of the very energy-hungry speaker. It is the level of the sound volume and the activation of the sink sound that will have the most impact
on the battery life of the SYS'Nav XL! The addition of a dedicated charge manager allows to have a very precise state of the battery charge value. Voltage variations will not affect the displayed information.

Ultralight and compact, the SYS'Nav XL can be mounted a wing riser, leg mount, harness shoulder strap, flight deck, tandem spreader, etc, as with other similar Syride varios. It weighs only 81 grams including the new thinner and lighter hook-and-loop fastener strips.